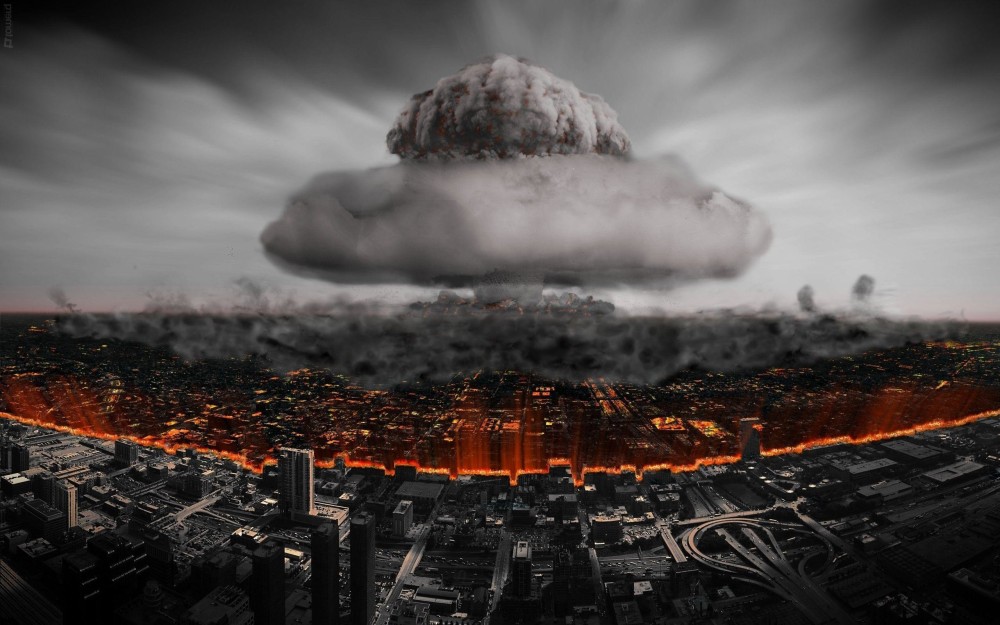 Then a strong angel took up a stone like a great millstone and threw it into the sea, saying, “So will Babylon, the great city, be thrown down with violence, and will not be found any longer.” – (Revelation 18:21)

I received this prophecy around 1:30pm today. It started with the names of Babylon being spoken over the voice of an online pastor I happened to be watching (the pastor was not talking about Babylon; he was talking about the obedience it takes to follow God). I heard:

Babylon the Great, a glutton and a whore besides.

Babylon is finished. The reign of Babylon is over. Babylon the whore of Abaddon*, Babylon the ruinous, Babylon the wreckage of something ‘once great’. Her rule is over and her power is finished. Just as is written in My holy scripture she will be dragged down from her pedestal and destroyed, her power will finish and vanish from the world scene and she will be no more. A footnote in history, Babylon you will be spoiled and your treasures taken across the sea to decorate the homes of your new masters. BABYLON MUST FALL. Your reign is already over, your power already taken from you. Soon reality will match up with prophecy and you will see yourself as I do. Prepare.

I will bring down judgements upon her until she is too weak to stand- strong body blows that destroy the people and their dwellings, their economy, their idols and everything else they hold dear. Babylon will reel like a drunkard in the street, staggering until at last she falls from the force of her injuries. Then her enemies will turn on her and tear her to pieces. As the dogs tore Jezebel when she fell from the high place, they ripped her to pieces while still alive, so Babylon called America will be destroyed at last by the foes she antagonised in her days of glory.

I the Lord will root up, pluck up, pull down and tear down the walls of Babylon until not one stone remains welded or joined to another. As Jesus spoke in prophecy against His own city Jerusalem- Oh Jerusalem, how I longed to gather you in My arms but you would not! Therefore not one stone shall remain atop another’, so will Babylon fall. She will be scattered from her roots- I say – I will pluck out this nation by the root til not one stone remains standing on top of another. Buildings will be blasted to pieces by bombs and missiles that fall from the sky, everything will be blasted, and craters will become the order of day in America. Huge craters, smoking craters, yes radioactive craters will be more common than mankind. As a child would ask a parent “Mommy where are the people?”, so men will question themselves as they walk through blasted wreckage searching for anyone else alive that they can connect with and cling to for friendship, shelter and survival. Bands of survivors will form but you Babylon will be no more.

You have rejected me as your God so now I give you a fierce king. A pretender, a do-gooder with answers that mask the smile of a murderer. I give you Barack Obama as your new leader and demi-god, false god, fallen angel worshipper. I give you a new king and a new regime that will grind your bones and your faces into the dust.

The Iron Kingdom is here and her architects are celebrating. Mass death is on the menu for America- aren’t they planning it? Haven’t they locked up the country and locked you up tighter than a prisoner in your own home? Haven’t I heard them speak in Heaven- “Terminate them, leave none alive?” By category and race you are listed for extermination, the plan is to leave none alive. Extermination orders have been issued and now the cup of blood for this nation will be filled.

Aren’t I the one who hears everything? I hear when a butterfly flaps its wings, I know when a house-fly rubs its hands. Therefore I know your leaders have prepared death for you in a pot, they will cook you til your bones are tender with exhaustion then serve you up for their meal. You will be EXHAUSTED through a series of crises until you are at your weakest mental and emotional state America. Then your end will come. Your money will fall down and die; American money will be monopoly money, a joke, lightly seasoned with tragedy when you realise all you once saved is worth NOTHING. It can do nothing, it can buy nothing, your savings will be blown away like the house of little pigs- whoosh! I huff, I puff, I blow your economy down. You will see this happen. Economic crash and fallout, but this time- no bailout. No money, no help, no nothing. Let the chips fall where they may.

Hardships. Hunger. Money loss. Health loss. Aren’t they planning it? Vicious new diseases are on the way, worse than this one. Aren’t they telling you to expect a “second wave”? Yet I say to you, WHO SENT YOU THIS DISEASE? Won’t you be corroded by chemicals sprayed in the air, in your food and in your baby products? Won’t your little ones appear with rashes that amaze everybody? Yet you’ll be told “It’s an allergy”, when really your child has received a dose of radiation from an unknown source. You will bury your children America, with weeping and miniature caskets; you will feel agony and pain and know that severe wickedness is the judgement of a nation that glories in sin. Sin is a reproach to a nation, sayeth the Lord, but you would discard me and run after your sin and your late night movies and your prostitutes and idol worship as if your very lives depended on it. So receive in your flesh the penalty for your error- children will be brought home to the Father and so escape the terrors of this world and the severe, severe DOOM that is coming to all men. This is the word of the Lord.

This prophecy is severe and related to several things going on in our world currently. First-Plague, disease and sickness. Every human knows about the coronavirus disease yet God keeps warning that worse things than that are coming. He has also told me we are in the era of vicious manufactured disease and biological warfare. “Man’s inhumanity to man” is how the Lord put it- I shared that in the last prophecy. People will resort to germ and biological warfare to reduce population in a deliberate push to create the world they prefer, and God is warning the body of Christ to be very vigilant* and prayerful about this. (*Vigilance also includes the wisdom of excellent hygiene and cleanliness so as not to expose oneself to these diseases, which will be spread in such a way as to harm and kill anyone.)

Second- Government. Politics in America is not what it seems; there is extreme activity behind the scenes and media, and the agenda of it all is to present Barack Obama as the ‘inevitable next choice’ to lead this country. Many say it will never happen, they trust their leaders and the constitution (which even now is being shredded under the feet of America’s secret elite), but I say ‘Trust in the Lord God Almighty who has continuously said: ‘OBAMA WILL EMERGE AS THE HEAD OF THIS NATION AND USHER IN A TIME OF TERRIBLE SUFFERING AND MASS DESTRUCTION’. Therefore given a choice between trusting the political system which shifts daily under emergency powers that govern life during Covid-19, and believing what God has said, I choose to believe the Lord and exercise extreme caution when it comes to this person Obama.

The words Destroyer, Abaddon, and ruinous all are connected. ABADDON is the name of the fallen angel who descends having the key to the bottomless pit in Revelation 9:11. The greek version of this demonic prince’s name is Apollyon, which means Destroyer. A destroyer is one who destroys, who ruins things. Ruinous means something or someone who causes devastation, who wreaks havoc and causes destruction on a wide scale. Think bombed out cities, or those types of wars where both armies die at a 99% rate til you can’t even say “Somebody won.” That’s what ruinous means. It means to devastate or destroy widely. In this prophecy the economy, money, people, idols, children, health and national safety are all judged and destroyed. The nation will be reduced to a shell and nothing good will remain of it. This is the indictment of Heaven against Babylon called America, may those who have ears truly invest their time in getting to know and pursue the God of heaven so that mercy can be sown to them as the end times continue to unfold. Shalom.

This is The Master’s Voice end time prophecy blog- Subscribe by clicking moving your screen up and down til the Follow+ button pops up on the lower right, follow via WordPress or use your email address. You’ll receive all updates. Like, Comment, Share and thank you always for visiting. Take care.